Stepping Out of the Comfort Zone

Welcome back to our next posting of trials and trails on our Te Araroa South Island journey, this section from Pelorus Bridge to Wakefield. 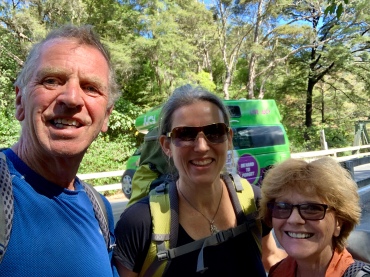 After a day in Nelson enjoying family hospitality and trail food drop offs at various locations, our return to trail commenced with an intercity bus ride from Nelson over the Whangamoas to Pelorus Bridge. John and I were delighted to have John’s niece Bronnie join us for the next three days of tramping.

It was in conversation on the bus that Bronnie divulged that she had been experiencing heart arythmia problems and didn’t know how she was going to manage uphill sections. This information set the course of action; the deciding factor in which of the two trail options available to us, that we would eventually take.

Following lunch of delicious homemade pies and coffee at Pelorus Bridge Cafe we set off at at midday. A 14 km walk up Maungatapu Rd on mainly unsealed road, often in hot sun, to start with before reaching the TA trail at 3pm, to Captains Hut 8km away. One wire swing bridge to go over. On reflection, I did not like this trail. Perhaps the late start to the day, perhaps after walking 14kms of rough road in hot sun, perhaps just getting weary near day’s end.

Climbing round rock faces with drops below, over large tree roots with same, I was slow and it took us until 7.39pm before reaching Captain Hut. Just enough day light to set up camp in the hut, wash at the creek which was so good, eat freeze dried dinner with lashings of instant mash potato and fresh veg,  which tasted oh so good, by candlelight,  then sleep in Captains Hut which we had to ourselves. The stars amazing outside.  All quiet except for the constant rushing of water over rocks in the nearby river.

Captains Hut to Middy Hut to Roebuck Hut. After brekkie left around 9 and lunched at Middy Hut. Met Dustin SOBO TA; nice young and very fit fellow heading to Rocks Hut then Browning Hut the next day, which is on the TA route. 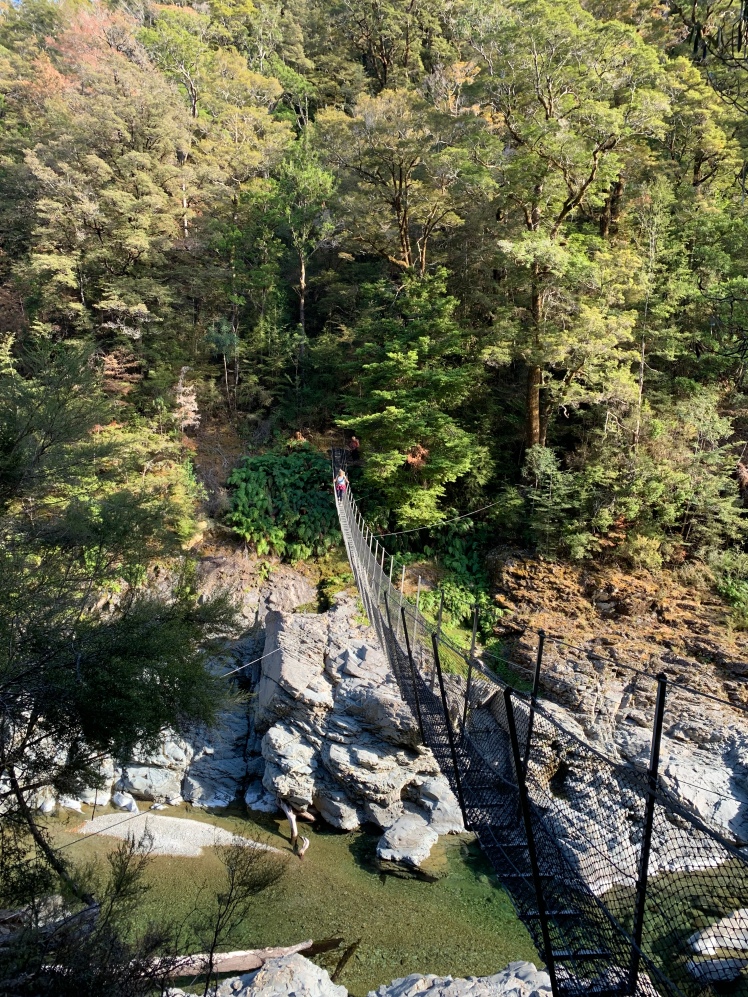 We were intending to tramp to Rocks Hut but in discussion with Bronnie and because Bronnie was worried about uneven heart arythmia and the fact that Rocks Hut had a steep 3 hour climb we decided on traversing to Roebuck Hut which was on the TA route 2 years ago.

Bad decision. Took at least 2 hours longer than the information board stated to get to the Hut. I’m not fast as I’ve already stated and  this trail was harder going than anticipated.  Numerous swing bridges (7, I think; not anxious about, but nonetheless cautious, crossing these) but it was the overgrown trail and that there were so many large fallen trees requiring renegotiation. 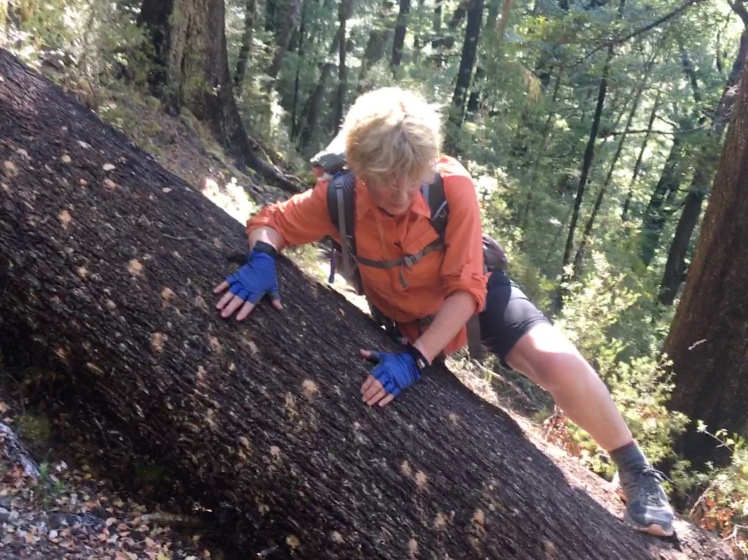 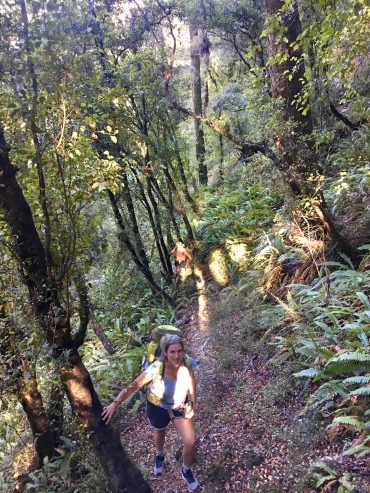 The trail also undulated significantly often along steep banks. Eventually we could see Roebuck Hut (much delight) but two more swing bridges a distance apart but within sight of the hut…to find more steep rock-bank negotiation before arriving after another day that took us so much longer than expected, was a ‘Really!’ moment. However, we had arrived safely, enjoying familial conversation throughout the day and with Bronnie pleased with her heart coping with the trail conditions

Arriving before dark, washed by the river where this time a multitude of sandflies thought I was dinner…try quickly getting out of a slippery, stoney (but refreshing river) while naked, slapping furiously, drying as quickly as possible with a handkerchief size towel, dressing and making a dash for the hut trailed by still hungry bloody sandflies!   Another ‘oh so yummy’ delicious dinner then sleep in a hut to ourselves. 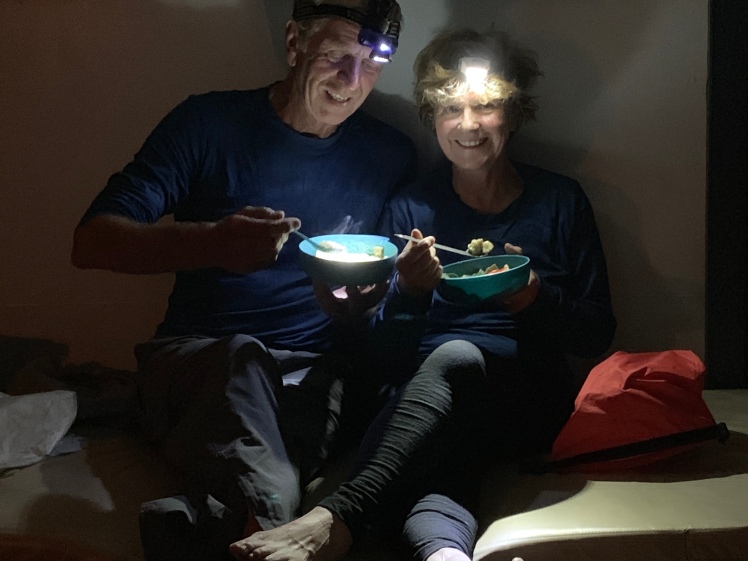 Before sleep, when sandflies had retired and cleaning teeth was required, stepping outside was magic.  An awesome star-filled sky awaited. Jewell like, I felt I could have plucked them, they felt within reach

Started day with coffee, meditation, and some yoga. Lovely.

Set off with good heart renegotiating the rocks, crossed the wire bridge to the trail junction and set off on what turned out to be another long trying day.

At least 12 fallen big trees along the way caused loss of time either clambering over, bush bashing or looking for an alternate way back the trail. The undulating trail also went on for ever along and in and out various ridge lines. 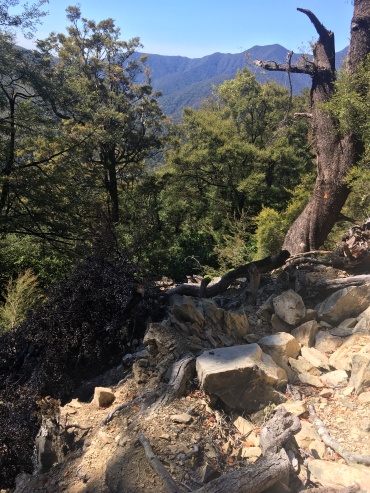 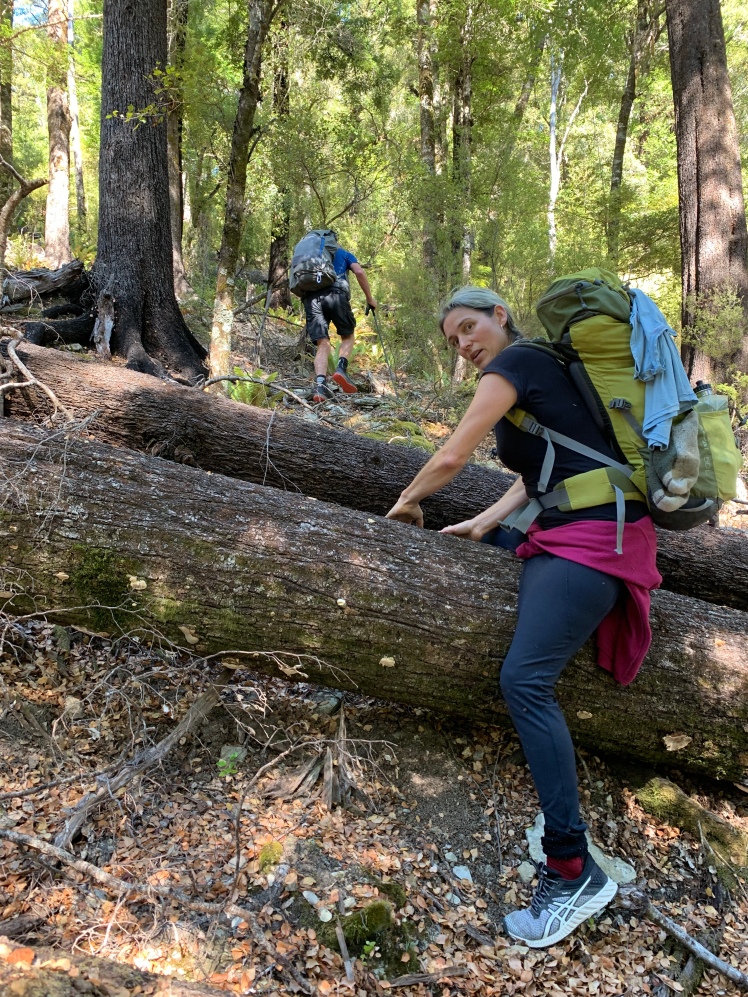 Trying and tiring, this track has obviously not been maintained in a long time. However the birds kept us entertained, the cooling breeze was a trail blessing, so too the shady trees but the best was a creek with running water. Many creek beds were dry. We were running low on water and were hoping Browning Hut would have some. This blessed surprise of coming across the running water creek lifted our spirits so much. We were delighted. Soaked our grateful feet and rested up for half an hour enjoying the special treat. How important is water.

Arrived at Browning Hut by 5.19 and pleased to find a small creek here also. Lovely to have daylight for a few hours  relaxing and preparing for the evening. As with each night, very weary and straight to sleep ASAP. Weka making loud insistent calls as we drifted to sleep. 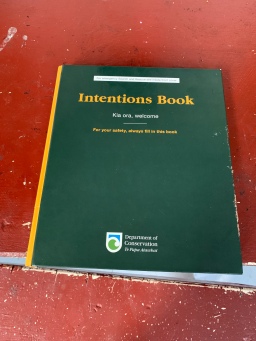 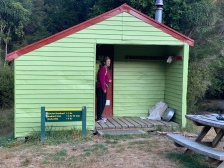 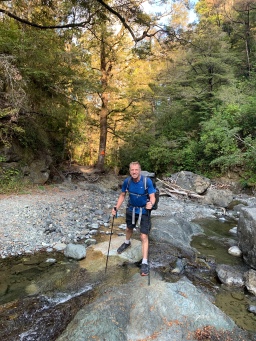 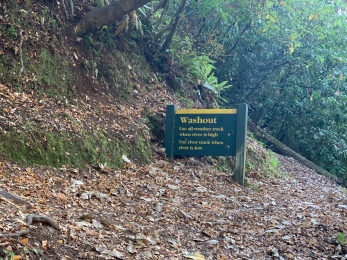 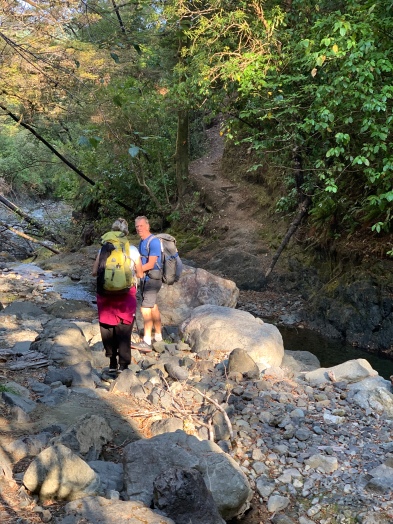 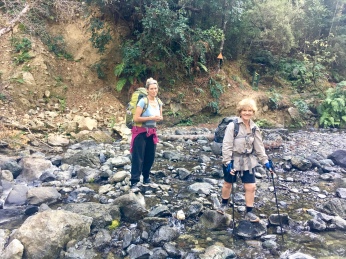 Trail leading from Browning Hut was a very nice affair, walking upon beech leaf litter along an easy trail. Eventually climbing over and around large rocks, crossing various small streams via conveniently placed rocks and a massive slip diverting the way on an easy trail with low river crossings to Hackett Junction. 6kms approx along Hackett Track to the barricaded bridge near the car park at Aniseed valley road. Climbed over the wooden barriers placed there to prevent people entering the track because of the high fire danger risks. Various river reserves along Aniseed valley road were also taped off preventing entrance for the same reasons.

Bronnie stashed her backpack under bushes, thumbed a lift to Robin’s to pick up her car, retrieve her pack and relieve us of ours while we walked the 6.5kms to Robin’s along Aniseed Valley Rd.

Robin was home having returned from his helicopter drop off/pick up with a crew to do repairs to a Hut in the Wangapeku Track over 3 days.

Bronnie headed home and we travelled with Robin to Richmond for lunch (our shout), to use an atm and buy dinner (steak mushrooms kumera) to cook at Robin’s.

Washed all our clothes and ourselves!

Lovely evening spent with Robin, listening to music, watching his video clip of his helicopter and 3 day work venture and talking old times.

Day12 Robin’s House to Dunmovin Cottage out of Wakefield.

Rain, quite heavy at times, was a joy to hear overnight. Left Robin’s 10am, after wind and rain squalls had lessened. The valley, the trees, the birds were rejoicing in the desperately needed rain and our walk was one of pleasing after-rain smells and cooling air. Leaving Aniseed Valley, other backroads, the main highway for about 500metres and we were in the little town of Brightwater enjoying coffee and scones at Brightwater’s HQ cafe. Met two interesting older cycling couples; one from Nelson out for a day cycle and the other from NSW cycling TA from Cape Reinga to Bluff. 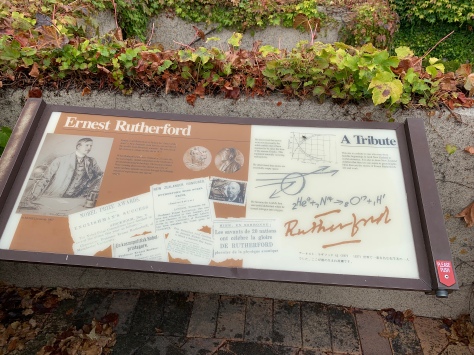 Stopped to read and admire the memorial for Lord Earnest Rutherford who was born in Brightwater. Followed the Great Taste Trail, one of many many cycle trails around the Nelson district to Wakefield where fresh veg, cheese and a bottle of wine was purchased from the local Four Square Supermarket.

Our accommodation for the next two nights on Eighty Eight Valley Rd enroute to St Arnaud was 3kms out of town. 1km to go or thereabouts, a moment’s inattention by John checking his phone for distance still to go and he managed to find the only broken section of tarmac to stumble on.

Down he went, heavy backpack and all,  to have a more intimate meeting with said tarmac. Curses, not sweet sayings, pursued but a brave soul picked himself up, limped for a bit while I said helpful things like ‘breathe down into your sore ankle’, ‘try and walk normally’ and ‘just as well you didn’t break that bottle of wine!’

Dunmovin cottage very small and cute with a verandah overlooking farmland and where the neighboring 4 piglets like to come grunt and chat while  using the boundary fence post to relieve side itches.

Colin and Pam very welcoming and accommodating of our needs including supplying a cool beer. Jo, who currently works for them had recently commenced walking TA from Queen Charlotte to Hackett Hut with friends. They too, walked the route we had taken from Pelorus to Captain Creek Hut, Roebuck and Browning Huts.

I was happy to hear that Jo thought this was a “horrendous” trail (and she has walked many around NZ) with all the recent slips and storm felling of so many large trees; she considers this to be an unsafe track. She said that this trail is now closed as DOC are no longer maintaining the track and is very surprised that information is not given on trail information boards or online indicating the unsafe trail situation.

After dinner and the luxury of a Netflix movie, we were about to retire when John realized that his foot had swollen around the ankle area. On arriving at Dunmovin cottage, neither of us had thought more about his ankle and the need to RICE it!

Dunmovin Cottage…we are not moving from…at least not today. We are resting John’s swollen ankle. Jo has come today, with Maori bush medicine called tupakahi; poisonous but a healing steeping balm and some healing oils to rub onto his ankle.

Pam has come with a tray of various nibbly food. Colin has given two bottles of his home brew. The kindness of folk. We will stay here again tomorrow night and then onto St Arnaud to start the Travers Sabine trail, ankles willing!

21 thoughts on “Back on Track…more than we bargained for”